Polycystic ovary syndrome (PCOS), risk, symptoms, causes, how to protect against PCOS? – Polycystic ovary syndrome (PCOS) is becoming a common disease among Indian women. According to statistics, one out of every 5 young women in the country is in its grip. Doctors believe that the risk of PCOS is greatly increased due to poor diet, sedentary lifestyle and habit of ignoring warning signs. 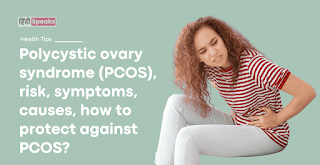 Risk of PCOS in adolescent girls

In a conversation with Only My Health, Dr. Raksha Madhu said that nowadays the symptoms of PCOS are also seen in girls in the age group of 13 to 19 years. This is due to overweight at this age. According to a research by AIIMS, 60% of PCOS patients are obese. At the same time, a UK study found that 24% of women with PCOS had a mother and 32% of female sisters had the disease. This means that PCOS can also be a genetic syndrome. According to Dr. Madhu, girls living in cities have a higher risk of PCOS than those living in rural areas. Causes include restaurant and cafe food, soft drinks and packaged food, incomplete sleep, emotional stress and non-existent exercise.

Beware of these symptoms of PCOS

Experts believe that if menstruation occurs prematurely, girls are at higher risk of developing PCOS at any time in life.

Causes of PCOS in adolescent girls

The biggest cause of PCOS is hormonal imbalance. Some girls have an increased production of male hormones, which causes some chemicals in the body to go up and down. Another major cause of PCOS is obesity. Being obese during adolescence can be the root of many problems.

How to protect against PCOS?

There is currently no permanent treatment for PCOS. Her symptoms can be controlled by changing her diet, exercising, and using certain medications. You can follow these tips to make a positive change in your life.