Problems related to periods in women have increased since the onset of the Corona epidemic. According to India’s Digital Health Portal Practo, 1 out of every 3 women in the country consulted a gynecologist during a lockdown. In a recent study published in the Journal of Women’s Health, scientists said that anxiety caused by the epidemic increased the risk of bleeding in women. 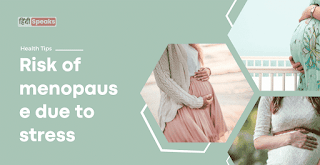 the research was done on 200 women in America. These women were neither pregnant, nor taking birth control pills, nor breastfeeding. At the same time, these women have never had reproductive health problems. The researchers found that those who were more stressed during the lockdown had increased bleeding during periods. With this the duration of periods also increased.

Bad cycle due to lockdown Corona caused a mental health crisis around the world, Archana’s SKA told The News Minute. The lockdown was a sudden change in lifestyle. The lockdown changed everything from people’s diets to sleep cycles. Stress and poor health are also a factor.

According to Dr. Archana, more stress is detrimental to the cycle of periods. While many women have had early periods due to anxiety, many women have had late periods. There are also some women who have increased bleeding and period. The reason behind all these problems related to periods is stress.

According to experts, a stress hormone called cortisol presses on women’s reproductive hormones. Which affects the process of ovulation and the period cycle. Bleeding and stress during periods also increase the pain that occurs during periods.

Evidence of this was found in a 2004 study in China. Research on 400 women found that people with more anxiety were more likely to have pain during periods.

Stress is about to stop periods but risk

experts believe that in the near future we may see long term side effects of Corona. In women, the incidence of polycystic ovary syndrome (PCOS) increases and periods stop due to constant stress.