In India even today 8 women die every day due to unsafe abortion, the reason behind this is that even today women are reluctant to go to the hospital. That’s when a country like the United States abolished women’s legal right to have an abortion, after which there is once again a heated debate around the world about abortion.

So on the other hand there are many young women today who get pregnant even though they don’t want to. But for fear of parents and stigma, take medicine from the medical to perform an abortion without telling anyone or then do home remedies. So often the girl is so young that she does not even have the necessary information about the side effects of abortion.

Gynecologist Dr Srilalita Avinash says she uses abortion pills for abortions at 4 to 6 weeks of pregnancy. But often young women take pills even without a doctor’s advice, which proves to be harmful to health. Abortion pills should always be taken with a doctor’s advice. Often abortions do not take place properly even after taking these pills, some part of the fetus remains inside the uterus, which leads to the risk of infection in the uterus. In this case surgery is often required. 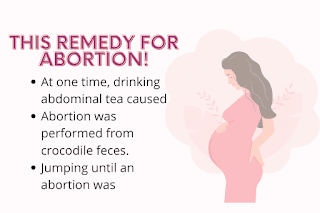 told Divya Bhaskar that the 20-year-old woman was unconscious and bleeding when she was brought to the hospital. When she was tested she was found to be pregnant. The young woman secretly tried to have an abortion. For this, the girl bought pills from a doctor and took the pill without consulting a doctor. After taking the pills, she started having severe abdominal pain and heavy bleeding. His family rushed him to the hospital after he lost consciousness.

According to the doctor, the girl was educated, but she took this step out of fear of being stigmatized due to her young age. Although it is not legal, many women take such steps to get rid of unwanted pregnancies. Today, the times are far ahead, yet many women consume things like ginger, figs, papaya for abortion which can lead to loss of life.

miscarriage. Penirail is a type of mint, which was known as a medicine for abortion. Women used to take it for pregnancy abortion. But sometimes it proved to be dangerous for them. This household remedy also often resulted in the death of the woman.

Abortion was performed from crocodile feces. It was once

believed that crocodile feces had spermicidal properties, and the feces were placed in women’s private parts for abortion.

many places, ants, camel saliva, deer hair, etc. were placed in private parts, which spread poison and led to abortions. According to Kathleen London, author of The History of Birth Control, some communities in the Lower East Side of New York believe that sitting on a pot of hot water causes an abortion. Many women consumed wild plant juices for abortion. Sometimes this remedy even caused death.

Jumping until an abortion was

often performed until women had an abortion. Women used to do this until the fetus loosened and an abortion took place. Later it came to be known as the ‘Lacedemonian Leap’. For this, women also used to jump in the rivers.