The Government of India has imposed a complete ban on wheat exports with immediate effect in the interest of national food security. Amid heavy crop damage due to the heatwave in the country as well as the Russia-Ukraine war internationally, there has been a dramatic rise in the price of wheat due to the acute shortage of wheat globally.

In many parts of the world, production of a variety of foods and oilseeds has declined or is in danger of declining sharply. As a result of which almost all the countries of the world are facing unbearable inflation i.e. high inflationary conditions due to the tense situation of food supply. Earlier, Indonesia imposed a complete ban on palm oil exports, which led to a sharp rise in the price of various edible oils in India.

Now that India has banned wheat exports to meet its own needs, global prices are expected to skyrocket. The G-7 countries have even criticized India’s move. Today we will discuss why India has to impose strict ban on wheat exports in addition to global production, price and impact factors. 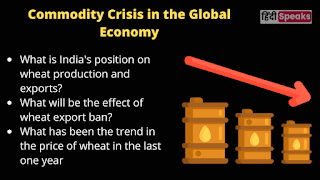 What is India’s position on wheat production and exports?

Since the outbreak of war between Russia and Ukraine in late February, the supply of wheat from the Black Sea region has been adversely affected, with global buyers increasing their dependence on India, the world’s second-largest wheat producer, accounting for 13.53 per cent of the world’s total production. . The United Nations has warned that the world could face a severe food shortage.

In April, wheat prices in India reached their highest level since 2010. Production has also been affected due to heatwave and lack of rainfall after five consecutive years of bumper production.

The massive hoarding by wheat traders amid rising prices is also a major factor. Before the outbreak of the Russia-Ukraine war, India had only a 1% share in the global wheat exports.

March, April and May are the hottest months in the last 100 years in many parts of India, especially in wheat producing areas. This has resulted in a loss of 6 per cent in production. Particularly in Punjab, Haryana, Madhya Pradesh and Uttar Pradesh.

On May 4, the government reduced the country’s wheat production estimate to 105 million tonnes, down 5.7% from the earlier estimate of 111.32 million tonnes.

When it comes to last April, India exported a record 1.4 million tonnes.

What will be the effect of wheat export ban?

Wheat flour prices have risen sharply in the last few weeks amid rising demand and high prices in the domestic markets. Wheat flour was priced at Rs 32.38 per kg in April, the highest since January 2010.

The government’s ban on wheat exports will reduce the local price and bring the price closer to the minimum support price set by the government. In India, rising prices of many food items, including biscuits, can be brought under control and thus the people can be relieved by reducing food inflation.