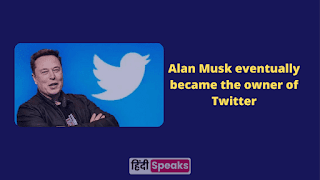 Tesla CEO Alan Musk has become the new owner of Twitter. Musk has struck a 44 billion deal to buy Twitter. That is a deal of Rs 3368 billion. According to this, Musk will have to pay. 54.20 (Rs. 4148) for each share of Twitter. Brett Taylor, chairman of Twitter’s Independent Board, announced the deal with Musk in a press release at 12:24 p.m.

However, just before the deal was announced, Musk tweeted that he would buy the micro-blogging site. Musk wrote hopefully my most outspoken critics will be on Twitter. This is the true meaning of burning up of bad psychic imprints.

I hope that even my worst critics remain on Twitter, because that is what free speech means

buy Twitter Alan Musk had earlier offered 43 billion, or about 3273.44 billion. News of the controversy surfaced on Twitter, but the 44 billion deal has now been finalized.

recent days the Twitter board had adopted the ‘Poison Pill Strategy’ to prevent the company’s takeover from Musk. However, as board members prepared to negotiate the deal, it became clear that Musk had found a breach in the Poison Pill. Musk already had a 9.2% stake in Twitter. The news is that Twitter’s attitude changed only after Musk had a private meeting with several shareholders of the company on Friday.

What is Poison Pill Strategy?

Although this is not always the first and best way to save a company, the Poison Pill Strategy is usually very effective.

Musk has always said that he is a supporter of Freedom of Speech. He also said that the reason behind the intention to buy Twitter was that freedom of speed was at stake on this social media platform and they wanted to ensure that it was maintained. However, according to free-speech experts, Musk’s statement is in stark contrast to his conduct. He has long been threatening his critics.